Metals hardness testing is the measure of how resistant a solid matter is to permanent shape change when an indenter is applied at a known force. When testing metals, the indentation hardness correlates linearly with the tensile strength of the material.

Contact us to further discuss which hardness testing method would be most suitable for you! 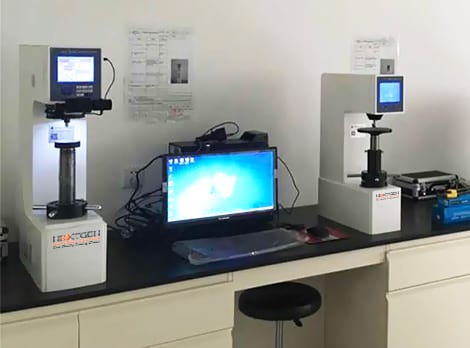 Rockwell Hardness Testing is an indentation hardness that measures the depth of penetration after undergoing a preload followed by a major load. Rockwell testing is generally used for quality control of steels and other alloys (including some plastics). Brinell Hardness Testing is an indentation hardness that measures materials that are too coarse or have too rough of a surface for other hardness methods. A carbide ball is pressed into a material at a defined load for a defined time and the resulting diameter of indentation is measured.