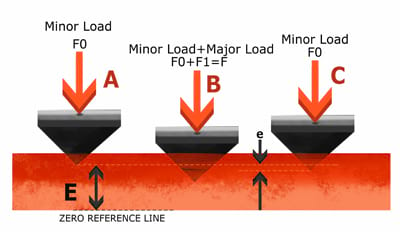 Rockwell hardness tester is defined as the indentation resistance and determined by measuring the permanent depth of an indentation after undergoing a preliminary force. The more shallow the indentation, the harder the material. Rockwell testing is defined with the ASTM E18 industry standard for the testing procedure. The Rockwell hardness measurement is calculated by first applying a preliminary test force, called a preload, for a specific period of time, called dwell time. The preload penetrates through the surface of the material to eliminate any interference caused by the surface finish of the test specimen. This point reached represents the zero point, also known as the reference point.Read More...

The Rockwell hardness tester has many different scales depending on the application of the tester on different materials. HR is used to express the hardness scale and the hardness value. There are a total of 30 Rockwell hardness scales which are specific for different applications. Rockwell regular and Rockwell superficial are two divisions on the Rockwell scales which each have 15 individual scales. Superficial Rockwell scales use a preliminary load of 3kgf and have a major load of either 15kgf, 30kgf or 45kgf. Superficial scales are used for materials that are as thin as 0.15mm (or 0.006 inches). Regular Rockwell scales use a preload of 10kgf and a major load of 50kgf, 100kgf or 150kgf. The use of the scales strictly depends on the hardness, thickness, indentation positioning and scale limitations of the materials being tested. It is important that the material is at least 10 times as thick as the depth of the Rockwell indentation. Diamond indenters are commonly used for harder materials such as case hardened steels. Ball indenters are more commonly used for softer and thinner materials such as copper alloys and sheet metals.

The most popular scales for Rockwell Regular hardness testing are HRC and HRB which use a diamond and ball penetrator respectively. The most common uses for the HRC scale include steel, hard cast irons, case hardened steel and other materials harder than 100 HRB. The most common uses for the HRB scale include copper alloys, soft steels, aluminum alloys and softer irons. Superficial scales are used where the standard Rockwell scales are incapable of testing due to the properties of the material. Materials that are too thin or small for the Rockwell regular scales can benefit from Superficial Rockwell testing. 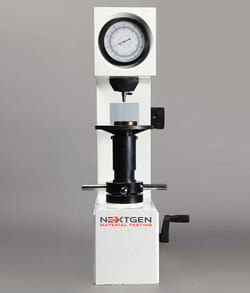 The NG-RockGen Analogue Rockwell Hardness Tester is designed to test the hardness of metals by determining the depth of penetration of an indenter under a large load compared to the penetration made by a preload according to the Rockwell regular scales. 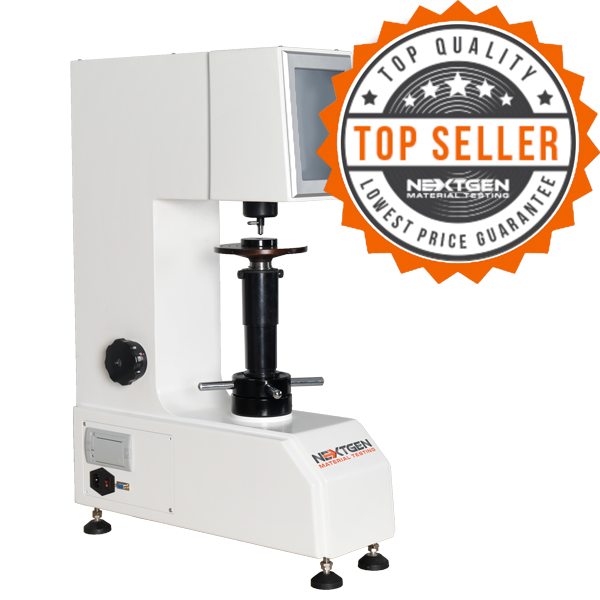 The NG150 GenRock system can be equipped with a variety of accessories to meet all of your hardness testing requirements. A fully motorized stage, Jominy accessories and a wide variety of specimen fixtures are available to configure the NG150 RockGen system to meet your application. 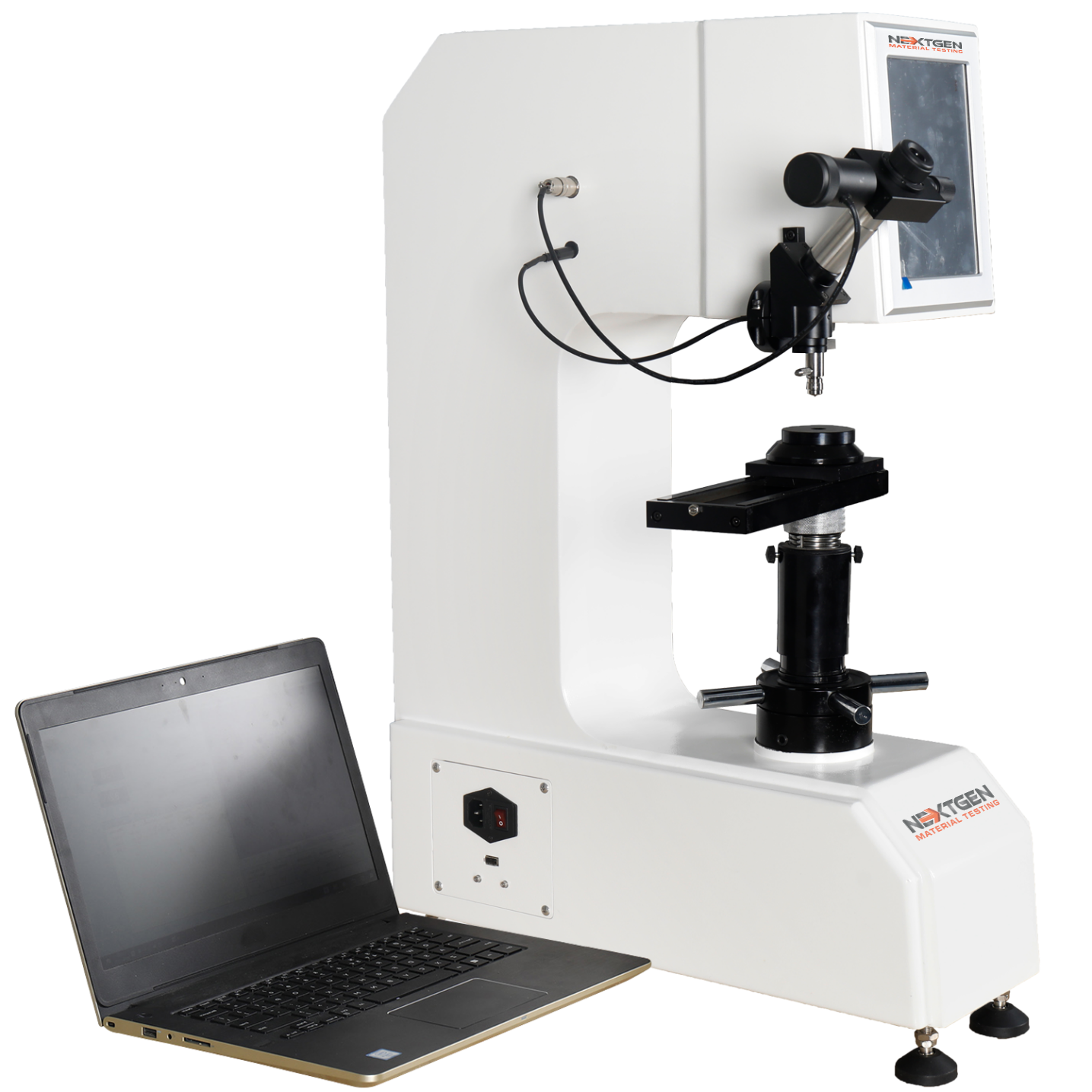 NextGen's Universal Hardness Tester is a closed loop load cell machine with an 8-inch touch screen interface is the ultimate user-friendly solution for your Vickers, Knoop, Rockwell and Brinell Hardness Testing requirements. The measurements are made through optical objective lens and CCD camera to collect indentation images and to generate your hardness reading on the touchscreen LCD. 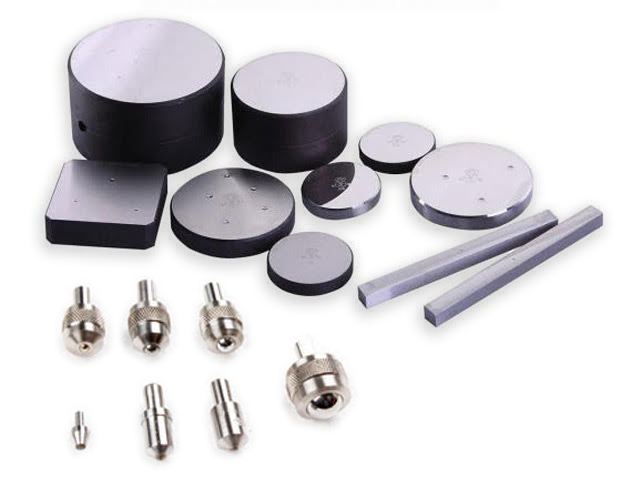 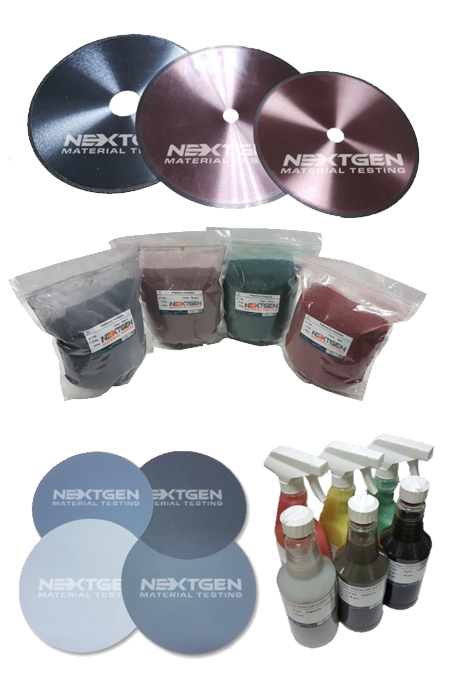