Impact tests are done to observe the mechanics that materials exhibit when they experience a shock loading that cause them to deform, rupture, or fracture completely and/or immediately.

Their main purpose is to identify the ability of the materials to absorb energy during collision. Such energy can be used to determine the impact strength, toughness, fracture resistance, and impact resistance of materials, depending on the test performed on them as well as the determined characteristics.

Impact testing is used to identify material behaviors at high deformation speeds. The behavior of plastics that are subjected to impact loading are characterized with the use of pendulum impact testers, high-speed testing machines, and drop weight testers.

Historically, the selection between pendulum impact testers and drop weight testers seemed simple. After all, it was merely determined by the end-use application requirement, preference of customer, and material. Indeed, traditional testers are simple, affordable, and reliable.

Then again, some researchers claim that these simple traditional tests are low in repeatability and accuracy. Fortunately, these limitations have a remedy, and such remedy are offered by means of new instrument modifications.

In addition, a movement has been made to abandon the Izod impact reporting in order to favor the Charpy test, which is a pendulum impact method widely used across Europe. The shift is primarily driven by the automotive industry to be part of their efforts in global standardization.

The development of the Charpy and Izod tests paved the way to impact testing for plastics.

In 1900, the Charpy impact test was created by Georges Augustin Albert Charpy. It was eventually regarded as a highly popular test for evaluating material relative toughness. What people liked about it the most is its affordability. It is economical, so it can be easily availed.

This impact test considers a standard notched specimen and measures its absorbed energy. It does this as it breaks under an impact load. The test is used to identify the impact toughness and notch sensitivity of engineering materials such as composites, polymers, metals, and ceramics.

A standard Charpy impact test specimen typically has a dimension of 55 mm x 10 mm x 10 mm and has a notch machined on a larger dimension. It consists of using a hammer to strike the specimen on a pendulum arm as it is securely held at the ends. The hammer should strike at the opposite of the notch.

The specimen absorbs energy, which is precisely determined by measuring the motion decrease of the pendulum arm. The vital factors that have an effect on material toughness include high strain rates by pressurization or impact, stress concentrators such as voids, notches, and cracks, and low temperatures.

As for the Izod impact test, it was named after Edwin Gilbert Izod, an English engineer. This test is similar to the Charpy impact test. It is also used to test materials at a low temperature.

The Izod impact test involves machining a specimen to a round or square section using either one, two, or three notches whose dimensions are 70 mm x 15 mm x 3 mm. This test also consists of a pendulum that has a determined weight at the end of the arm striking and swinging down the specimen as it is securely held in a vertical manner.

The strength of the impact is identified by the energy loss of the pendulum. The loss of the height in the swing of the pendulum is measured to identify this energy loss. According to researchers, impact strength is the tendency of the polymer composites to endure a high energy impact without fracturing or breaking.

The Charpy impact test and the Izod impact test are both highly sought after means for determining the toughness or impact strength of materials. In essence, they are tests that measure the overall amount of energy that materials are able to absorb.

Such absorption of energy is related directly to the material’s brittleness. Glass and ceramics are examples of brittle materials. Thus, they have a lower absorption rate as compared to ductile materials such as aluminum and copper.

It is important to understand the properties of energy absorption of materials because this would predict the amount of plastic deformation they would be able to endure before a catastrophic failure occurs. In addition, it is vital to remember the differences and similarities between these two impact testing methods.

Ever since the Charpy impact test was applied in 1900, it has remained to be one of the most widely used impact testing methods up to this day. It is mainly preferred because of its relative ease of use to create samples and obtain results.

When performing a Charpy impact test, a weighted pendulum is dropped from a certain height with the purpose of making contact with the chosen specimen. This material would then absorb energy, which can be inferred by measuring the pendulum’s height before and after it was fractured and then getting the difference between the two measurements.

The specimen is placed on the machine in a horizontal position. The machine is usually a bar with dimensions of 55 mm x 10 mm x 10 mm with a machined notch into its face. This notch is either U-shaped or V-shaped and is positioned to face away from the pendulum. It helps to focus the stress as well as to encourage the fracture. 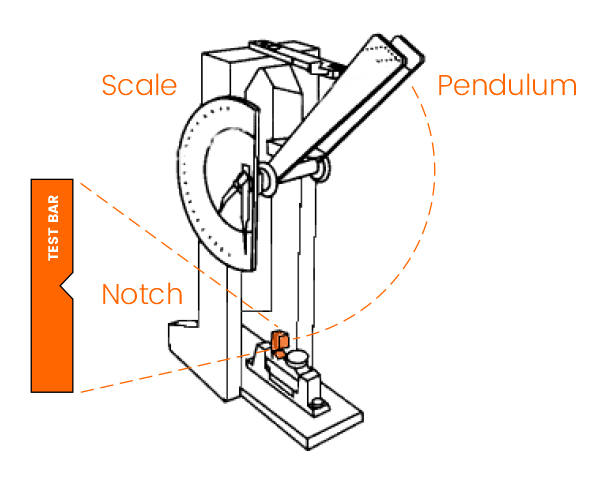 The test method was first introduced in 1903 by Edwin Gilbert Izod. The test apparatus as well as the design of the specimen are highly similar to that of the Charpy impact test.

Then again, there are certain differences, such as the specimen orientation, which is vertically clamped onto the apparatus with the notch positioned toward the pendulum. Then, the pendulum impacts the specimen at a certain point above this notch.

Typically, plastic samples are a 64mm x 12.7mm x 3.2mm bar that features a machined notch (V-shaped). On the other hand, metallic samples are usually a round 127mm x 11.42mm bar that has one or three machined V-shaped notch/es. The Izod impact test methods usually used are ISO 180, ASTM D256, and ASTM E23. 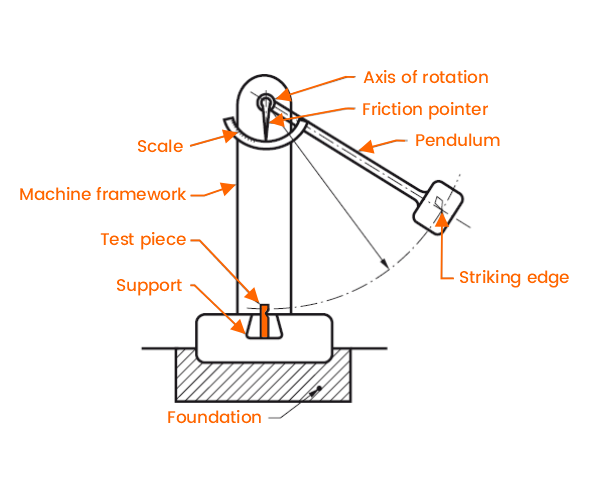 So, Which One Should You Use?

Ultimately, the choice for the type of impact testing depends on the purpose. Some of the factors to be considered include product design, checking incoming material, material characterization, quality control, and R&D.

However, the ISO, ASTM, and other standards are specific as to what plastics they refer to. For instance, thin films can be tested according to the ASTM D1709 standard while the polycarbonate used in auto parts can be tested by either ISO 6603-2 or ASTM D3763.

Features of the Impact Testing System

The vital features of an impact testing system include a suitable specimen, supports, and anvils. The specimen has to be properly positioned in order to efficiently receive the blow of a moving mass with enough energy to break it. There should also be a device used to measure the energy absorbed by this broken specimen.

When it comes to rubber and plastic specimens, Class J Automatic Impact and Izod Impact Testing system is most commonly used for Charpy and Izod impact tests. This test features tensile impact pendulum as well as fixtures. It can also be performed on plastic films and sheets. Due to the newly improved design, it offers highly cost-effective configurations to address Izod tests from 1J to 22J and Charpy tests from 1J to 50J.

Preparing Impact Specimens with a Notching and Broaching Machine

The GenNotch 2000 Series is a plastic notch making machine. It is designed for Charpy impact testing. It is floor-mounted and self-contained. It also comes with an interface that is easy to use and user-friendly.

The GenNotch 2000 is a highly recommended specimen notching and broaching machine for plastics. It is used to cut Izod and Charpy U-type and V-type notches in accordance with the most recent industry standards. Thus, it delivers the best quality notching samples that can be compared with milling machines.

In addition, the GenNotch 2000 has the capability to prepare two specimens at once, thanks to its dual broaching system. The entire process can be completed with repeatability and accuracy in just a matter of seconds. The broaching knives are also excellent in quality and can be bought depending on your preference.

The Charpy and Izod impact tests are known for determining the toughness of materials. A lot of industries use them to test the strength of materials. These tests measure how much energy is absorbed by a notched sample once it is hit by a weighted pendulum. The energy computed then serves as the measurement for the toughness of the specimen.

The equipment required for Charpy and Izod impact testing are very similar in a lot of ways. Nevertheless, there are still differences like the material orientation in the impact tester.

If you are in search of a reliable supplier for impact testing, you can check out NextGen Material Testing, Inc. They are highly respected and well-renowned when it comes to pendulum impact testers. They have high quality hardware and software.

In fact, they have highly advanced Charpy Impact Testers available on the market. They also offer equipment that do testing on metal hardness and tension as well as machines for testing plastic and rubber. Even better, they offer these excellent equipment at affordable rates. Request your quotation today.