The NBS Abrasion Tester: What You Need to Know

Also known as an NBS abrasion testing machine, an NBS abrasion tester is a professionally-designed equipment specifically intended to determine the amount of resistance to abrasion possessed by vulcanized rubber, as well as other similar materials that are commonly used in the heels and soles of footwear. The equipment is particularly useful for materials that are more than 2.5 mm thick.

It is generally accepted that when making a comparison between different kinds of rubber materials, the service performance may not directly correlate to the predictive test’s results. The test method must not be used to measure the abrasion resistance for materials with compositions that have a marked difference from the reference compound standard.

The results may be misleading when, for instance, comparing polyurethane compositions with the reference compound standard.

In general, there are two abrasion types. These are sliding and impingement. It is sliding abrasion when the adjacent surface passes across the rubber surface. On the other hand, impingement abrasion is characterized by sand particles that hit the surface when the rubber wears off. In actual service, most of the wear happens as a combination of the two types of abrasion.

Localized or restricted friction forces can inflict high levels of energy when sliding on the rubber. When the rubber is unable to withstand such forces, abrasion and wear take place.

Impingement by particles happen in various applications such as rebound plates, sandblast hose, and chutes. Elastomers can easily yield, and then distribute the stress from particle impingement. In a sandblast test, there will be a 90-degree impingement angle. Resilient and soft rubber has more abrasion resistance compared to either cast iron or steel. However, you cannot use just any kind of elastomer. However, under exactly the same conditions, tough tire tread will more rapidly wear out compared to a soft type of elastomer. The particle impingement’s angle has a substantial effect on the type of material to be used. When the angle goes below 90 degrees, the advantage of elastomers over hard metals will decline and eventually disappear. 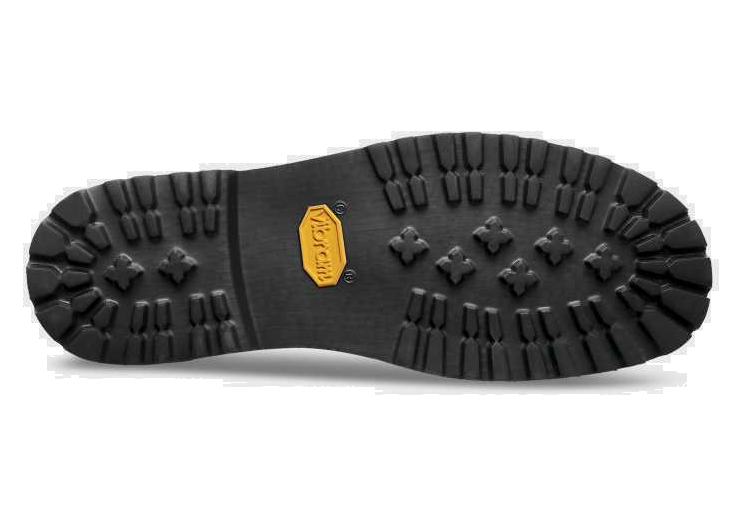 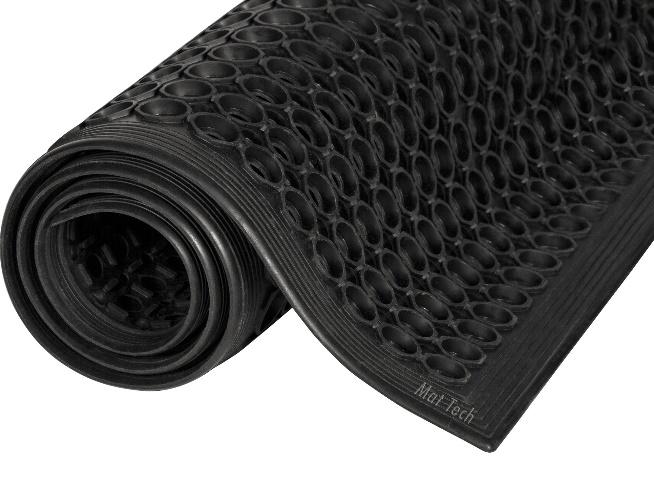 It can be difficult to correlate abrasions tests done in a laboratory to end-use applications. The measurement of properties will be helpful in the choice of materials. However, it is not recommended to compare to the rates in actual service as it could be thousands of times bigger as regards to temperatures and velocities.

At least 25 lab abrasion test devices are available. This is a clear indication that this kind of testing is not easy to correlate to service performance. In the rubber industry, the most widely accepted test device is the National Bureau of Standards (NBS) Abrader. It is a slinging type of abrader. The NBS abrader employs constant velocity, and uses a specified abrasive grit under a fixed load. 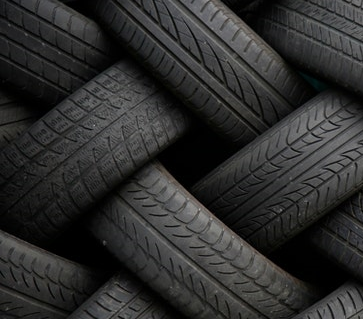 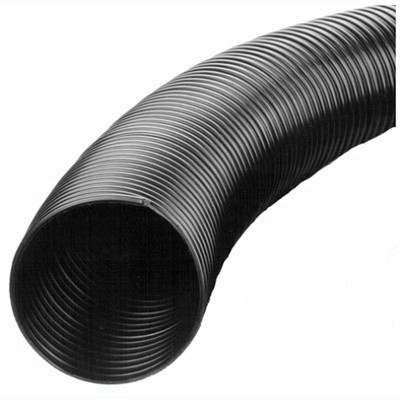 It will not show how a particular compound will perform under widely fluctuating conditions. Neither will it give any indications about the material’s cut resistance, flat spotting, or chunking.

The results of the abrasion resistance test of vulcanizates of urethane, as measured using two lab tests, the NBS test as well as the Taber Abrader are illustrated in the table below: 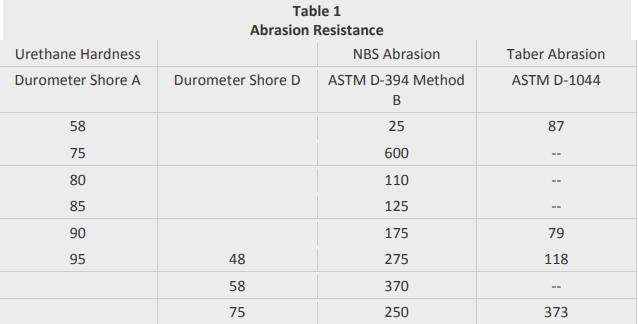 Take note that the two tests resulted to different values. However, there is an explanation for the variances in the performance of the vulcanizates of urethane. The NBS testing is a simulation of a very harsh service condition. In this particular case, the hardest among the volcanizates are able to hold up best.

On the other hand, the Taber test is a much less punishing type of test. The softer compounds showed better performance compared to the harder materials because they have more resilience and “give” when under load.

The sliding abrasion resistance increases with the increase in hardness for the NBS testing. The 75A durameter vulcanizate had an unusually high NBS Index. This is probably because of the abrasive wheels lubrication by the plasticizer that was used in the compound.

With the increase in the hardness of urethane, there was a corresponding increase in NBS values for non-plasticized compounds as well.

There is no doubt that getting meaningful values from laboratory abrasion tests is quite difficult. Despite this, however, urethane is considered as having superior sliding abrasion resistance. It performed very well in numerous applications where wear is considered an issue. In the tests, urethane has consistently outworn the conventional plastic and rubber materials, typically by a factor of as high as 8 to 1.

As mentioned, the NBS abrasion tester is a machine used for testing the abrasion resistance levels of vulcanized rubber and other similar rubber compounds. The system is most commonly in accordance with ASTM D1630 and ASTM D394 standards. Common applications include the heels and soles of footwear. A typical model is equipped with an intelligent system for power failure recovery. It performs the measurements through the volumetric specimen loss when exposed to movements from a normalized abrasive medium attached to a rotations cylinder.

Below are the most frequently asked questions about the NBS abrasion testing machine, and their answers. Hopefully, you can find the answers to some of the questions you have in mind.

The standard reference compound size should measure 1 x 1 x 0.25 inch. The specimen must be of this size in order to fit into the NBS abrasion testing machine’s arm slot.

If a specimen is over the standard thickness, it will require buffing until it is reduced to the appropriate size. On the other hand, thinner specimens should be stacked or piled in layers until the required thickness is achieved.

The new reference compound must have been stored during the past six months prior to the scheduled testing. A compound that has been stored for more than six months is not qualified to be used as specimen for the test.

Also, the reference compound must undergo a curing process before the test. This is necessary to make sure that the material will get an even abrasion. The compound reference is cured at a pre-determined temperature.

There is likewise a breach in the compound used for conditioning the new abrasive paper. This break has similar dimensions to the standard reference compound.

Q: What principle is behind the NBS abrasion testing method?
A: The NBS testing machine employs a test specimen that is abraded against a rotating drum that is covered in abrasive materials. A weight is put in place to pull the specimen towards the drum with the use of a consistent force. The testing machine operator gauges the strength of the material by assessing the remaining volume after a test cycle.

First, the technician unlocks a bridge holding the gauges. The bridge is then lifted to allow the arms to swing backwards for mounting of the specimen. Each compound is then mounted and secured in the slots.

The operator lowers the arms to the metallic drums. The bridge is lowered and locked in place, with a calibration weight on every arm. The technician likewise calibrates the gauges, then sets the test’s number of revolutions. Finally, the operator presses the button to start the abrasion testing.

Prior to the actual testing, the equipment is given a break in run to allow the conditioning of the new abrasive paper. Garnet paper with #40 grit is used for the test. It can be used for 18 runs.

The operator runs the NBS tester until the compounds’ surface matches the drum’s shape. The gauges and revolution counter is set to zero. The operator then restarts the tester.

The machine will stop from running when it has abraded 0.1 inch off the fresh set of specimens. The operator gets the values from the initial two runs in the latest computation.