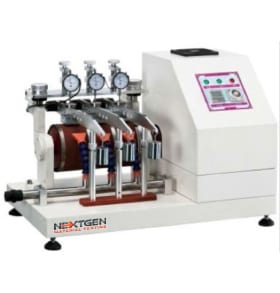 Like other consumer products, rubber undergoes tests for quality and durability. The NBS Abrasion test will measure a material’s Resistance to Rubber Abrasion.

This test method also determines the durability of rubber materials used in footwear. These include rubber used for shoes and heels.

Footwear Abrasion specimens consist of natural rubber or a combination of rubber compounds. But there is only a specified number of material compounds for the abrasion test.

Some rubber compositions produce inconsistent results and are not suitable for testing. Even using the proper rubber compounds may result in some variance. Tests are often times repeated until results are consistent.

The NBS Abrasion tester consists of the following components:

It has three rotating metal drums that will each have an abrasive paper covering. The drums also have metal clamps used to hold the abrasive paper. Each drum is about 6 inches in diameter.

The tester also has three graduated gages. The gages sit on a bridge on top of the metal drums. Each gage measures the amount of abraded material removed during testing.

It also has an Air compressor for cleaning residuals in the abrasive paper. A basin underneath the tester collects residues from the abrasion.

The original standard reference compound has a length of 8 inches and a width of 1 inch. Laboratories cut this to the standard size for the Rubber Abrasion Test.

The standard size for the reference compound is 1 inch X 1 inch, and 0.25 of an inch thick. Specimens need to be this size to fit into the arm slot of the NBS Abrasion Tester.

A specimen thicker than the standard will need buffing until it reduces to the right size. Thinner specimens get stacked in layers until they reach the needed thickness.

The new reference compound has to be in storage within the last six months before testing. Any compound older than six months will not qualify for the test.

Technicians must follow the guidelines in the ASTM D1630 Abrasion standard during testing.

To start the test, a technician unlocks a bridge that holds the gages. He or she then lifts the bridge up. This will enable each arm to swing backwards for specimen mounting. The technician then mounts and secures each compound in a slot within each arm.

The operator then lowers each arm to the metal drums. He or she lowers and locks the bridge in place, and puts a calibration weight at each end of an arm. The technician also calibrates the gages and sets the number of revolutions for the test. All that remains is to press a start button to begin the abrasion test.

The actual run uses the new reference compound along with three previous compounds. There will be four passes that will go through all four compounds. Each pass will test three compounds.

The technician runs the NBS Abrader until the surface of the compounds matches the shape of the drum. The operator then resets the gages and the revolution counter to zero. He then restarts the NBS Abrasion Tester.

The machine runs until it abrades 0.1 inch from the new set of specimens. The technician then records the readings for this run. He then computes the abrasive index of the compounds. The technician uses the values from the first and second runs in the new computation.