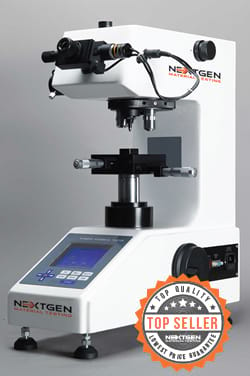 The Vickers Hardness Test was designed to ensure that a component, material, or material treatment is strong enough to resist constant stress once it becomes part of a machine. It is one of the more reliable hardness test models being used by companies to determine if certain parts are hard enough to be used for a certain object.

As of now, there are multiple devices out there that can help a company perform this hardness test. But, of course, it would be best if one can find a cost effective Vickers hardness tester to invest in. But before you start looking for one, there are a few concepts that you need to understand first.

What Exactly is the Vickers Hardness Test?

The Vickers test is one of several hardness tests employed by Quality Assurance specialists in determining the compatibility of a certain material or component in a machine. What makes the Vickers test unique is that it was specifically designed to test objects that do not have a large surface area or are comparatively small in size. Hence, it is also alternatively known as the Microhardness test.

The concept of the test is quite simple. The testing instrument would gauge the strength of the component by applying pressure on it through a fixed load which ends with a diamond-tipped indenter. How strong a component is gauged under the Vickers test is determined by the size of the indentation left on it after enough pressure is exerted.

As a rule of thumb, the size of the indentation is inversely proportional to the material’s strength and resistance. To put it simply: the smaller the indentation left, the more durable the component will be.

There are essentially two types of hardness testing options. These are:

A. Bench Top – Typically classified as conventional hardness testers are classified under. These stationary units that are designed to perform NDT tests on materials. The materials, also known as specimens, are place on the table of the tester, called the anvil, to perform the test. The units are designed to be in a single location of the lab.
A key characteristic of these testers is their weight. A bench tester could weigh at least 50kg and would need to be installed to the workshop floor. Despite this, bench-type testers are quite dependable as they rely on the conventional methods of scaling a material’s hardness.

B. Portable – Unlike their bench-type counterparts, portable hardness testers are lightweight, hand-carried, and capable of testing materials in different hardness scales. Because of this, the primary advantage that a portable tester brings is the ability to bring the tester to the test material instead of the other way around. Thus, an operator no longer has to take samples from a site, transport them, and feed them to the instrument. The portable type of equipment is particularly useful for large and irregular shaped specimens that simply cannot fit on your traditional Bench Top tester.

The portable testers can come as both analogue and electronic devices based on the operator preferences. Typically, electronic devices are more accurate, allowing to minimize the human error factor. Every portable tester will come with a number of features that extend their usefulness to an operator. This includes the ability to save measurements and transport them to a computer for further processing.

Which Device Type is the Best? 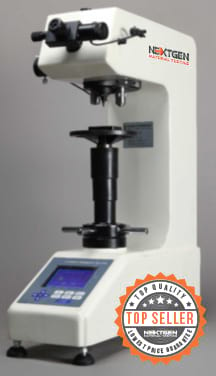 Bench Top and portable hardness testers come with their own advantages and disadvantages. It’s up to you to weigh on each and every feature they bring and determine which devices are best for you.

If the workshop in question deals with a lot of manufacturing processes which would involve the movement of materials from different facilities, then a bench type tester would be preferable. If, on the other hand, the workshop deals more with quality assurance and control, then a portable device is more recommended.

If cost is a concern, the more affordable Vickers hardness tester would be the portable version. These variants are less expensive to acquire and contain several features which would enhance an operator’s experience with the device. It is worth noting however, that the Portable Vickers test method performed by the Ultrasonic Hardness Testing machine is a relative measurement method. Provided your specimens are smaller or more suitable for metallography laboratories as well as the budget permits, the bench top solution is the more accurate option.

Lastly, there is the factor of human error since this is unavoidable in any process-based activity. You need to purchase a device that will actually aid the operator in avoiding mistakes especially in interpreting the measurements. In this regard, portable devices have the advantage as they simply give out the measurements instead of having the operator read and interpret what is indicated on the scale. 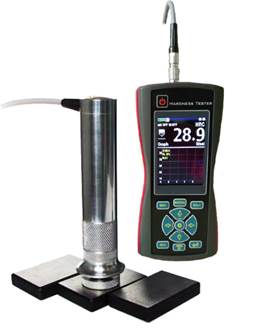 Although it is preferable that you buy only brand new testers, there is no rule out there that prevents you from purchasing used ones. A lot of hardness testers are built to last and, as such, remain reliable even after years of use.

In most cases, analogue devices are recommended if you opt to purchase secondhand. They have fair simpler systems which means that they tend to last longer and are easier to repair in case of breakdown. As with digital testers, the repair process could become expensive and complicated.

You should also consider the role that these refurbished machines would assume if you purchase them. At best, they can serve as reserve testing instruments in case your primary machines are out of order.

However, if you can find a particularly well-kept secondhand tester, you can always use it in tandem with your new ones. This way, you have access to different hardness scales to refer to when testing materials during a production process.

When deciding on a cost effective Vickers Hardness Tester, one should also keep in mind that these instruments would eventually have to replaced, after several years of use. This is even in spite of the fact that some testers were designed to last. Eventually, they will have to be replaced with newer and more reliable testers.

As such, it would be recommended that you plan out how long and how frequently you are going to use these devices for every production cycle. If you can find a way to make the device fit in to the current layout and capabilities of your facility, they would eventually play an integral role in helping your company improve on the quality of its output while minimizing error.